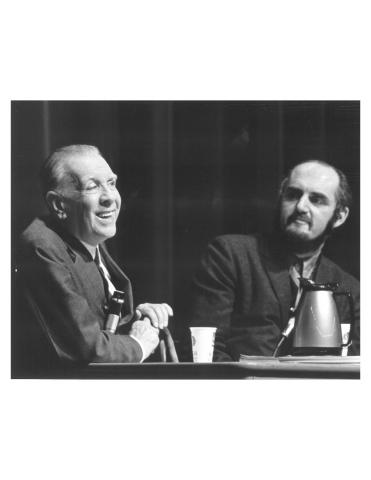 One of the 20th century’s greatest writers, Jorge Luis Borges – who called the universe a library, served as director of the Argentine National Library, and left a prolific body of literature when he died in 1986 – now has his own sort of library within a library at Michigan State University Libraries, which recently acquired more than 19 boxes of correspondence, papers, photographs, rare manuscripts, first editions, publicity, clippings, and other ephemera related to Borges’s life and work that was collected by former MSU Professor Donald Yates. The most recent materials in the Donald Yates Collection on Jorge Luis Borges were acquired from Joanne Yates, the wife of Yates, and join books in the Library’s Borges Collection of first and rare editions and books in the Donald A. Yates Spanish American Literature Collection to form a prodigious and valuable collection for scholarship. The announcement of the acquisition was made by Michigan State University Dean of Libraries Joseph A. Salem, Jr, who said the collection includes work that helped define literature of the 20th century.

“Borges had a special connection to Michigan State University, and we are delighted to expand our collection of Latin American literature with these materials,” Salem said. “This collection offers tremendous opportunities for research and discovery, and we think it offers opportunities for scholars across many disciplines – cultural studies, history, literature, philosophy, and math. Yes! One of the most famous figures in literature incorporated advanced concepts of mathematics into his stories and essays.”

Donald Yates joined MSU as an assistant professor of Spanish in the early 1960s. He was the coeditor and translator of the first collection of Borges's fiction to appear in English, and he had a long friendship with Borges. He was instrumental in bringing Borges to MSU, where the Argentinian writer shared several lectures, taught several classes, and received an honorary doctorate. Borges died in 1986. Yates died in 2017.

Highlights in the collection from Don and Joanne Yates include several first editions, Borges’s handwritten manuscripts, 100 hours of recordings on about 75 cassette tapes, one video, and several reel-to-reel tapes.

MSU Head of Murray & Hong Special Collections Leslie McRoberts says the latest acquisition from Joanna Yates will help shape the Library’s collection of Borges scholarship into one of the most significant collections in the world. “Some say that Borges’s favorite genre was the epic, so it feels appropriate that MSU Libraries now has an epic collection of his work,” McRoberts said. “These manuscripts offer researchers and students opportunities to learn about one of the most transformative writers in modern literary fiction. We already had a research-level collection for the study of Latin American literature. This latest acquisition makes our collection truly special.”

The Library has already seen demand for the new collection. One scholar requested scans of nearly all of the Borges manuscripts held by MSU Libraries, and he has received them with the help of Special Collections staff.

The MSU Libraries are partners in the teaching, learning, research, and engagement missions of Michigan State University. Murray & Hong Special Collections was established in 1962 with the charge to house special materials and to build, preserve, and make accessible important research collections for educational use. Today, Special Collections holds over 450,000 printed works, numerous manuscript and archival collections, and an extensive collection of ephemera supporting research in popular culture, radicalism, comic art, and gender. Notable rare book collections include early veterinary medicine, eighteenth century British history and culture, modern American literature, cookery, and natural history. All of the materials may be seen and used in the Special Collections reading room during open hours. The core mission of the Libraries is to create an inclusive environment where intellectual discovery is encouraged.