“The most magnificent work of its kind ever produced” --Sotheby’s 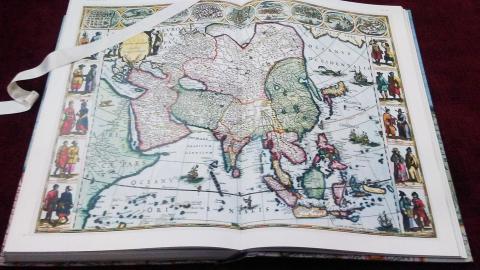 Joan Blaeu, like his father before him, was the official cartographer to the Dutch East India Company. This affiliation brought his mapmaking firm advantageous intelligence on the far eastern lands due to the Dutch monopoly on the spice trade.

Atlas Maior was the culmination of more than 60 years of work. The House of Blaeu published several atlases since the founding of the firm in 1596, including Het Licht der Zeevaert, Theatre du Monde ou Nouvel Atlas, and Theatrum Orbis Terrarum.

When this atlas was released in 1665 in multiple volumes, it was the most expensive published book available at the time. The Republic of the Seven United Netherlands, newly independent from Spain, presented them as state gifts to various foreign dignitaries.

Sadly, the mapmaking dynasty came to an end less than 10 years later when a fire destroyed much of Blaeu's buildings and equipment.

MSU Map Library has a 2005 reproduction of the original Atlas Maior on display in the Map Library. This reproduction was produced by Benedikt Taschen and published in Cologne by Taschen in 2005.

Joan Blaeu and his Grand Atlas. Written by Cornelis Koeman and published in Amsterdam by Theatrum Orbis Terrarum in 1970.

Tooley's Dictionary of Mapmakers. Edited by Josephine French. Published in Tring, Herts, England by The Map Collector Publications in association with Richard Arkway in 1999.