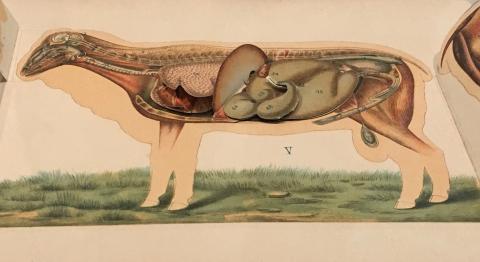 Some connections between humans and animals feel almost inexplicable, but a new exhibit at the MSU Libraries gathers historic books from MSU’s veterinary medicine collections and notable items in Special Collections to examine how these bonds have been illustrated, documented, and described for hundreds of years. The exhibit examines the history of the horse, the link between human and animal health, the role of farm animals, the practice of beekeeping, and the history of hunting and fishing. It includes rare books and illustrations dating from the 17th century. Dean of Libraries Joseph Salem said the exhibit showcases the variety of ways we have thought about and interacted with animals over history and showcases the rich collections available at Michigan State University.

“This exhibit feels particularly appropriate to share here in the MSU Libraries because it reveals a practical approach to teaching and learning that we have always valued here at MSU,” Salem said. “It also feels timely. There is much discussion now about viruses that evolve and spread from animals to humans, and this exhibit considers theories of zoonotic diseases as well as concepts of connection and companionship. We encourage students and researchers to explore the exhibit and consider how this rich collection might expand and deepen their projects.”

MSU Libraries Health Sciences Librarian Andrea Kepsel, who curated the exhibit, said the work she selected reveals early understandings (and sometimes misunderstandings) of animal anatomy, veterinary practices, disease transmission, dairy farming, and breeding. “The pleasure of the exhibit is that it presents work that is historical, practical, and beautiful,” Kepsel said. “It gives people an opportunity to view delicate, rare books that address real-world, everyday issues. It also underscores how powerful the relationship between people and animals can be.”

The importance of collecting rare and special books for use as unique research tools has been recognized by the Michigan State University Libraries since its beginning in the mid-nineteenth century. Special Collections was formally established in 1962 to house special materials, as well as to build, preserve, and make accessible important research collections for educational use. Today, Special Collections is known for its extensive collection of ephemera supporting research in popular culture, radicalism, comic art, and gender. Notable rare book collections include early veterinary medicine, eighteenth century British history and culture, modern American literature, cookery, and natural history. All of the materials may be seen and used in the Special Collections reading room during open hours.